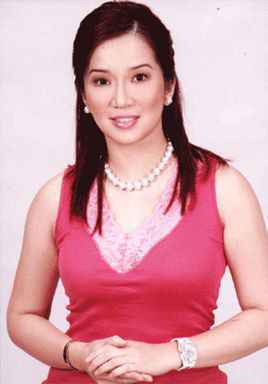 Kristina Bernadette Cojuangco Aquino-Yap (born February 14, 1971 in Quezon City) is a prominent television and movie personality in the Philippines.

She is the fifth and youngest child of former president Corazon Aquino and Benigno Aquino, Jr., a popular opposition senator during the Ferdinand Marcos regime. She is the youngest of five siblings: Maria Elena, Aurora Corazon, Benigno the III (who currently represents Tarlac in the Philippine House of Representatives) and Victoria Eliza.

In recent years, Aquino has been labeled the Philippines's "Queen of Talk," due to her success in hosting talk shows. She was crowned as the 2004 Box Office Queen for her hit movies such as Feng Shui and So... Happy Together.

In 2006, she regained the same Box Office title for her movie Sukob, which is said to be the highest-grossing Filipino film of the year.

In the infamous 1978 parliamentary elections where her father was a candidate, the seven-year-old Aquino wooed the crowds as a stand-in for her imprisoned father at campaign rallies. Aquino spent most of her elementary school days in the United States because the Aquino family was in exile. After the assassination of her father in 1983, Aquino returned to the Philippines and was a precocious presence in rallies against the Marcos regime.

After the 1986 revolution that removed President Ferdinand Marcos from power, the teenaged Kris stepped into the limelight, starting with guest spots on television dramas and comedies, as well as talk shows. Finally, she made her film debut with actor-comedian Rene Requiestas in the comedy Pido Dida. This movie was a blockbuster hit and made Kris the box office queen for that year.

Aquino afterwards had a commercially steady, though critically panned career and managed to score an acting nomination for The Fatima Buen Story. She also starred in a film based on a true-life murder, The Vizconde Massacre. Its financial success and successive crime films of the same vein in which she starred in gained her the nickname "Massacre Queen" by newspaper critics.

Kris graduated from the Ateneo de Manila University in 1992 with a degree of Bachelor of Arts in English Literature.

Kris Aquino started her career on TV at ABS-CBN. Being young then, she was the starrer of the short-lived comedy show Luv Ko Si Kris.

It was not until 1994, that she did Nandito Ako with action star Philip Salvador that started one of Kris' very controversial love affairs. Aquino became pregnant and had a child, Joshua.

With her movie career slowing, Aquino shifted her sights on a television career as a talk show host launched through The Kris Aquino Show produced by VIVA on Channel 4. But it was in GMA Network showbiz oriented talk show Startalk where she co-hosted with Boy Abunda and Lolit Solis that her hosting capabilities were noticed.

Media conglomerate and GMA Network's rival ABS-CBN noticed her undeniable hosting wit, offered her a contract and launched Today with Kris Aquino, one of the most successful talk shows of the 1990s. She also started hosting The Buzz on 1999 together with close friend Boy Abunda. On year 2001, when game shows became very popular in the Philippines, ABS-CBN tapped her to host Game KNB? to compete against IBC-13's local franchises of The Weakest Link and Who Wants to Be a Millionaire?. In January 2003 to May 2004, she hosted yet another successful morning talk show that was supposed to last for 2 weeks but lasted for 16 months entitled Morning Girls with Kris and Korina alongside popular media personality Korina Sanchez. Not all of Aquino's television endeavors were hits; notable failures include Balitang Kris, which lasted for one season. As of 2005, she hosts The Buzz, a showbiz gossip/talk show with Boy Abunda and Cristy Fermin for the same network, as well as Pilipinas, Game KNB?, a game show which focuses on trivia.

She had been also controversial for wearing plunging dresses which noted her as a fashion-talk show queen or as a fashion victim. Kris was also judged as a "taklesa queen" for her often to your face attitude when doing interviews. This often comes out in the form of nosy, thoughtless lines of questioning that often make her interview subjects very uncomfortable. Kris' demeanor during these interviews has sometimes been compared to that of a spoiled little girl; she constantly sways from side to side, giggles uncontrollably, and brushes her hair while her interviewees are responding.

Kris Aquino is the highest paid TV Host in the Philippines, thus, making her the 'Queen of Talk and Game Shows'. She is also one of the Filipino actresses who are sought after by companies for product endorsements. At present, she is an endorser for a popular corned beef brand as well as for San Miguel Corporation and Smart Communications. Incidentally, the same corned beef brand is the name of basketball team that current beau James Yap plays for. Her commercial for San Miguel became the most remembered tv commercial and was said to have a 99 percent audience recall. She was paid a total of P20,000,000.00 for the endorsement.

Aquino was also bestowed the title of "Commercial Princess of the Philippines". Said title was given to her for having numerous of TV and print appearances in Filipino media. and for being one of the highest paid commercial endorser] in the Philippines, being at par with Sharon Cuneta.

She also hosted the Philippine franchise of Deal or No Deal, which was previously a part of ABS-CBN's primetime lineup. It ended its first season last February 23, 2007, and is expected to be back around June of the same year.

Despite her popularity in TV shows and product endorsements, Aquino is often criticized for her caustic, sometimes obnoxious comments towards guests. In particular, she can come off as unintentionally cruel to the contestants on her game shows. In the vernacular, such actions is referred to as being "Taklesa" or tactless.

Kris Aquino got her start in movies with the help of Regal Films, one of the oldest film outfits in the Philippines. Her first few movies were mostly wholesome stories, the most enduring of which was the Pido Dida series, where she was paired with the late comedian Rene Requiestas and earned her first box-office queen award. She later on shifted into more serious roles, notably with massacre films such as The Vizconde Massacre, Myrna Diones Story, Elsa Castillo-Ang Katotohanan, and Humanda Ka Mayor. Despite her being a big draw in the box office, her acting skills were considered stiff and mechanical. She was also dubbed then as "massacre queen" because of her portrayals in massacre movies which was the vogue during the time.

She first drew praise for her acting when she bagged a nomination from the Gawad Urian award-giving body, composed of film critics, for the film The Fatima Buen Story. She eventually won a supporting actress award for the film Mano Po (2002 Regal Films), where she portrayed a weak-willed and submissive scion of a wealthy Filipino-Chinese clan. This is her comeback movie after her long layoff from movie acting.

But Aquino's most commercially-successful movies in her career are: Feng Shui, a Star Cinema production that featured Chinese influences and omen. Feng Shui, which was made during the wave of "Asian-style horror" flicks that spread throughout the continent since 2002's The Ring, made P180,218,395. It was the highest grossing Filipino movie of 2004, and the second most successful movie overall next to Spider-Man 2 which made over P225 million and earned Kris her second box office queen title. "Sukob," another horror thriller which she starred with Claudine Barretto in 2006, is the highest grossing Filipino film of all time surpassing Tanging Ina, Anak & her own starrer, Feng Shui.

Aquino is also known for her troublesome relationships. In the mid-1990s, Aquino was also involved with a Purefoods basketball player, Alvin Patrimonio, who was then married. In her relationship before Purefoods Chunkee Giants player James Yap, she was involved with then Paranaque mayor (ex PBA basketball player and actor/tv host Joey Marquez), who she later split with in a tumultuous ending, alleging that Marquez pointed a gun at her face, and also gave her a venereal disease. She made her admission in an exclusive tell all interview by former co-host Korina Sanchez on the ABS-CBN newscast TV Patrol. Such admission became the highest-rating news segment in the history of Philippine newscast that even those in the workplaces paused from their work to hear Kris' story. Kris filed charges of grave threat, illegal possession of firearms, grave coercion and less serious physical injuries against Joey Marquez, but the former eventually dropped charges against the latter.

She is now married to PBA 2006 MVP superstar James Yap of Purefoods. They had their civil marriage in July 2005. She is also expecting her second child after she announced on The Buzz that she is pregnant. Their marriage was recently rocked by the revelation of a former receptionist from Belo Medical Group named Hope that she had a relationship with James, which he vehemently denied in an interview with Korina Sanchez.